Scout now has a proper preferences window, just like every other Mac app. It comes up by hitting Command-Comma, goes away by hitting escape. Similarly, both the media manager and the theme chooser are in panels, keeping the main text editor view clean, and much less confusing about which view you are in, and how to get back to where you want to be. I’ve added a toolbar to the top of Scout, with a pair of buttons to switch between the text editor and the web preview. The other two buttons on the toolbar are to add a new post, and to show and hide the library of previous posts. 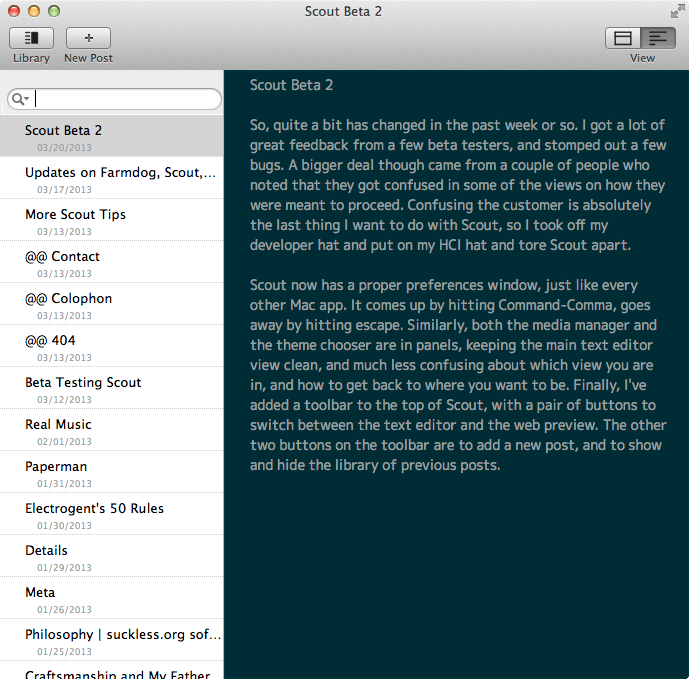 I’ve cleaned up the library view quite a bit too, and a added search field to the top which should come up with focus when you open the library. The search field searches both the title and the text of every post, so it should be able to find what you are looking for. The blue background was removed, and replaced by subtle dotted lines separating the posts on a white background.

I’ve also tweaked the image preview that comes up when you click an image link. The image is bigger now, and the background is more of a smokey white instead of the black it was before. I think this change makes the image more viewable, and makes the background fade out better, drawing attention to the image and away from itself. 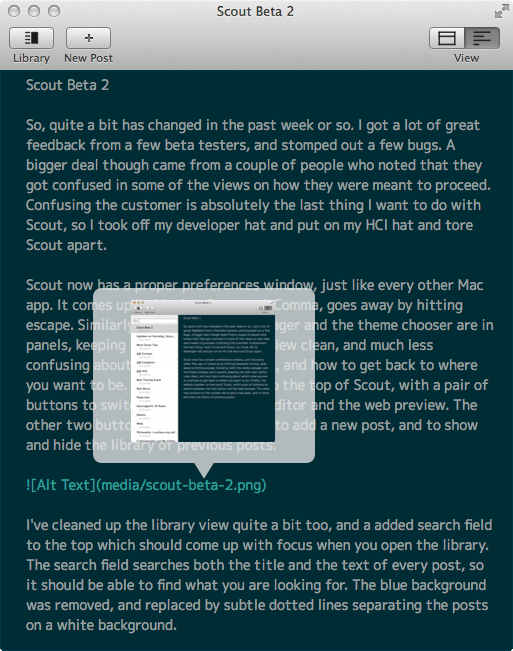 I’ve fixed a few things about the default text editor theme that bothered me (and John), making it easier to read and overall more pleasant, at least I think so. It looks especially good full screen. In fact, my opinion is that the full screen view is the best way to use Scout.

Finally, I’ve made a few tweaks to the data storage engine, fixing a bug that prevented publishing a site on the first run. Funny story about that. Last week I became a bit overconfident in Scout, and sent out invitations to try it to a group of well known writers that I respect. One of whom replied that he had downloaded and tried Scout, found a laundry list of things wrong with it, tried to publish to a folder, and Scout crashed. I was mortified. Turned out to be a stupid change that I had made, and obviously not tested thoroughly enough, right before sending out the application. I put the publishing code on a background thread to continue user interface responsiveness while Scout wrote out the files. Turns Out, that’s not a good thing. However, what crashed the app on the background thread merely caused an error that Scout recovered from on the main thread, so finding the crash actually allowed me to find and fix a major bug. I just wish I had found it before sending it out.

With all of that being said, I really think that Scout is in much better condition now than it was a week ago. I’m excited.