Right now, in my garage, is a 1969 Volkswagen Beetle sedan. It’s a deep maroon in color (for now), has several spots of troublesome rust, a few holes in the floorboards or body, and, is absolutely beautiful. For now, I’m calling it Jerry Carcia.

When I was in high school in the early nineties I drove several cars, but none were as close to my heart as the Bug I drove back then. It was black, early sixties. I’d camp out in it, occasionally push start it, and once when I was driving on the highway the hood flew open and blocked my view. I had to roll down the window and stick my head out to pull over safely. But I loved it. When I joined the Navy, I left the Bug with my parents and they sold it for me. For over twenty years I’ve regretted getting rid of that Bug.

Over time I’d occasionally go to look at one. I’ve got a collection of advertisements for different Bugs that I’ve saved. At a dinner with friends a few months ago I mentioned that I wish I had kept my old Bug, and that I’d like to get another one eventually. A few days later my friend forwarded me a link to a Facebook Marketplace ad for the ‘69 in my garage now. It wasn’t far away, and the price wasn’t exorbitant, but in my mind I suspected I would pass this one over and continue my decades-long practice of wishing from the sidelines. But… since my friend sent it, and since it looked like it was in good condition, I talked it over with my wife. She looked at me and said: “You’ve been taking about doing this for as long as we’ve known each other, if you want to get it, I’m completely ok with that.”

So, as soon as I could I arranged to go look at the Bug. I pulled a bunch of cash out of the ATM (always a hassle), and drove out to take a look. In person, the Bug looked like it was in even better condition than I thought. New carpeting inside, everything looked clean, the engine started, the tires and wheels were in great shape, no obvious rust issues on the body that I could see. I couldn’t drive it because the tires were flat, but I wasn’t expecting to drive this car, it’s a fixer-upper. I paid the man, got the title, and arranged with a friend to bring a trailer out to haul the Bug home.

After some finagling, we were able to drive the Bug onto the trailer, haul it home, drive it off the trailer, and into the garage.

I’ve had the Bug for a few months now. I’ve never been much of a mechanic, I’m learning a lot going through the different systems. My plan is to get the Bug to a drivable state, then clear out the third bay of my garage by building a shed in the back yard and moving all my equipment out there. Once that’s done, I’ll move the Bug over to the third bay and start on a full body-off restoration.

To get the Bug to drivable, my initial plan is to address these issues:

I figured once I’ve addressed each of these issues than I can at least drive it around town here for a bit. Run to the store for milk or what not. As of now I’ve addressed the brakes. All four wheels stop now. I’ll need to re-run the brake line going back to the rear wheels to get it run in the body right, then bleed the brakes again, after that they should be good till the full restoration. More on the brakes later.

It’s good to be a VW owner again. I’m looking forward to restoring the Bug. It’ll also give me something to write about and share here. The Bug has a long way to go before I’ll consider it “finished”. My intention is to restore as much as possible to factory original, with occasional upgrades for safety or modern convenience. When I sit in the bug, I’d like to feel like I’ve been transported back in time, back to the 90’s when I was first driving a VW through the woods of Montana. 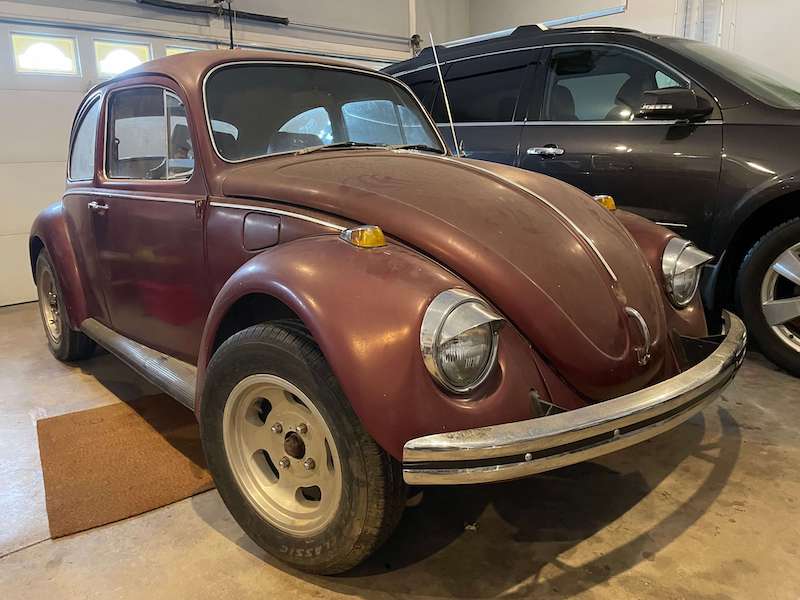