A Glimpse of the Future

The Motorola ATRIX 4G is technology released before its time. At first glance, it seems like any other Android phone with impressive technical specs and questionable user interface decisions, but the phone as a phone is not the interesting part of this device. 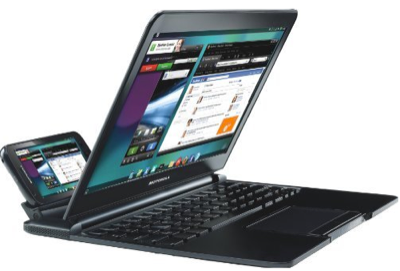 The phone can be docked to what appears to be a notebook, and used as an (almost) full-fledged computer. Motorola (soon to be Google?) calls this a “webtop application”, and packages a version of Firefox. I would call this technology an early preview of whats to come.

The iPhone changed the mobile phone market. It proved how much a small mobile device could do. Before the iPhone mobile applications were horrible, slow, and expensive. I remember it costing $2.99 per month to play Pac-Man. The disruption caused by the iPhone is still being felt as the market continues to adjust, and innovation continues to leap forward. As the phones become more powerful and more capable, the role of the desktop computer will continue to decrease. Eventually, the big boxes will only be useful to developers and movie makers. The role that they played will be replaced by our phones.

On my desk, as on many others, sits my MacBook Pro (clamshell mode, in a BookArc, if you were interested), a monitor, keyboard, mouse, and my iPhone in a dock. How long will it be until the MacBook is no longer needed? How long until all I need is to drop the phone in the dock, my monitor springs to life, and I start working the same as I always have?

As a short sidebar, touch based interfaces are wonderful, but I believe that there will be a place for the tactile response of a physical keyboard for a long time to come.

A brief look at the history of computers shows a steadily declining physical size, and a steadily increasing amount of power. I do not believe that this trend shows any sign of slowing. For example, recent research by IBM shows great promise in increasing the amount of, and reliability of, local flash storage. How long will it be until both the raw computational power and local storage in a phone both match what is available in a notebook computer?

The form factor of a notebook computer is a good trade off. There is ample screen resolution, and a full sized keyboard for serious work, and it is portable enough so you can comfortably sit on your couch to get things done. However, it does not pass the pocket test. That is, you can’t fit one in your pocket… unless you have freakishly large pockets. But, what about a notebook sized device with a keyboard, monitor, and touchpad that you could slide your phone into like you load a CD now? What if you could take that same phone and dock it on your desk to use as your main desktop computer. What if you could bring it with you anywhere, and have everything with you, anywhere you had a pocket?

The ATRIX is clearly a step in that direction, but it is too little, too soon. The ATRIX is more of a curiosity than a real consumer device that people would be expected to use on a daily basis. I explored one at a local BestBuy for a while, and found the user interface to be laggy, slow to respond to mouse events. It felt like using old emulation software. I can not imagine why anyone would choose to use the device as it is, the hardware is simply not ready. However, slow hardware is a temporary problem. The ATRIX is a glimpse of the future.