Computing has been on a linear progression towards smaller, more mobile, and more personal devices for seventy years. It seems unlikely to me that the notebook computer is going to be the last iteration of “real” computers for the foreseeable future. Critics can point to the failure of Windows 8 as proof that the market doesn’t want a converged device, but I would argue that they simply went about it the wrong way. There are two different interaction mechanisms between mobile and desktop, but the infrastructure below the user interface could be shared.

What if the desktop was an app? Everything inside of your desktop computer, the entire world of OS X, wrapped up in an app that launches automatically when your mobile device is docked. If your phone rings, pick it up and your desktop goes away for a few minutes. When you are done, put it back.1 It’s not ideal for everyone, but it is an interaction model that would work. It’s a trade off.

When your iPhone is not docked, there would be no need for desktop metaphors in the iOS user interface. Sit down to do some work, and you have everything you always had in OS X, including the Terminal. Windows could have done this too. When the device is mobile, show the Metro interface, when it is docked, default back to a Windows 7 interface. I’m not alone, Canonical is working on this for Ubuntu. However, with Ubuntu’s spotty record for usability, stability, and performance I have doubts about Canonical bringing a viable product to market. I have high hopes, but I think this is going to have to come from Apple. Once again, they won’t be the first to market, but they have the opportunity to be the first on the market to do it right. 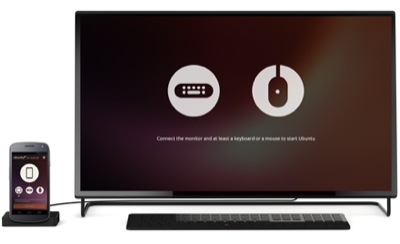 I think the argument that the phone hardware is not powerful enough to do this is shortsighted. History has shown that hardware becomes faster smaller over time, it is conceivable that the current “desktop class” chip in the iPhone 5S could run all of the applications on your desktop right now, if they were recompiled for the architecture. Will desktop hardware always be more powerful than mobile? Probably. Will it matter? Probably not. Why? For the same reason we don’t all have servers sitting on our desks, we just don’t need that level of power in our day to day tasks.

There are obviously many pitfalls to this concept as well. What about those notebook computers? They could be shells where a phone slides into it like a CD-ROM does today, though that sounds a bit clunky. Perhaps a better idea is that if you still need a notebook than you get one, but maybe more and more people will not.

I wrote about this topic for OStatic last year, and I stand by what I said. The Ubuntu phone concept does look like the future of computing, what I can’t see is how far out that future is.