Yesterday I had the pleasure of chatting with David Sparks about an upcoming Field Guide he’s doing on DEVONthink. He had asked for power users of the app, and given that I’ve been going back and forth with it for years I sent him a screenshot and let him know I’d be happy to help. He responded and here we are. If you’ve ever listened to David on one of his podcasts, he’s just as personable and friendly speaking with him one on one. 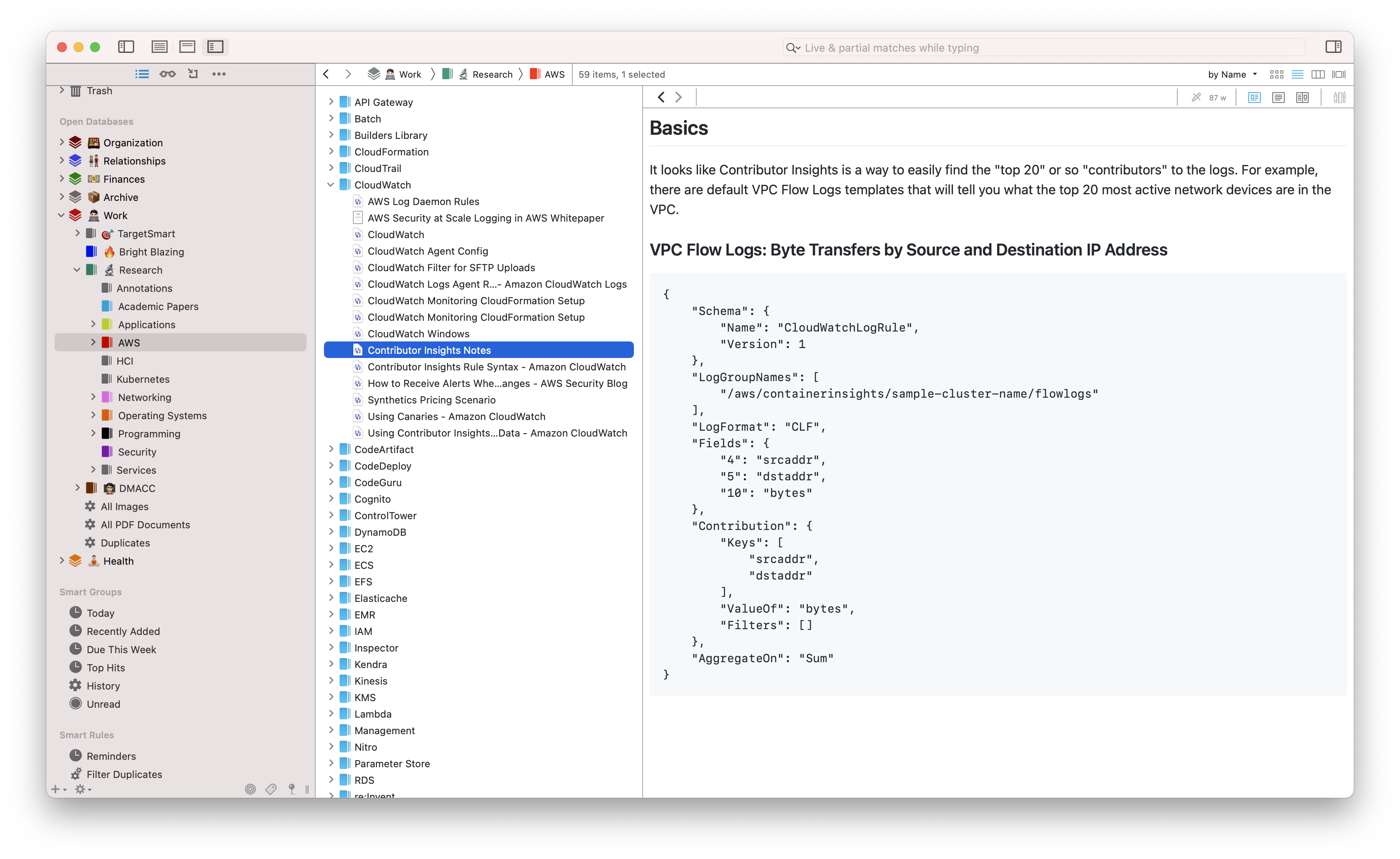 I’m looking forward to the new Field Guide. My part in it will be as a kind of power user addendum where a few existing users give a glimpse into what their setup looks like. I hope David can get something useful out of my rambling, overall I felt like I barely scratched the surface of what I wanted to say about DEVONthink. I didn’t get into the custom CSS for Markdown display, or the Sorter menu extra, or how you can import a webpage from Safari as Markdown and strip all the adds and other junk out of it. I didn’t get into backup and restores of the databases, or my Take Note hotkey (^space), or how I integrate RSS into my research database to stay on top of new developments in AWS. Ah well, there’s only so much you can do in 15-20 minutes. I’m sure David already covered all of this in his Field Guide anyway.

Also, since DEVONthink is so good at search and discovering additional data, I closed all but my research database during the recording so I didn’t accidentally surface any proprietary or personal information. One of the biggest reasons I use DEVONthink is because it can keep all my personal data private and secure between machines, but that wouldn’t do much good if I just showed the world my bank account numbers or details about our AWS environment in a search result.

Hopefully David can work some magic in editing. If I’m honest I’m a little nervous about how my section is going to turn out, or if it’ll be included at all. Overall though, I think I’ll be in good company, and that the Field Guide is going to be a great success. I’ve got a lot more to say, maybe I should revisit that podcast idea I’ve had for a while. No matter how my part tuns out, it was great to talk to someone who’s work I’ve been following online for years. David’s work with OmniFocus and Paperless have been foundational, and I hope he has the same success with DEVONthink in the upcoming months.