A phrase I’ve found myself repeating to friends and family from time to time recently is that “some things used to be better”. As a technologist, and an optimist, I’m normally very positive about the future, but lately I’ve come to think about the place some modern technology has in our lives as increasingly negative. I’m rethinking, yet again, our relationship with the many devices we’ve invited into our lives.

While I was pondering this topic and waiting for the mechanic to finish with my car I wandered into a second-hand store and found this beauty of a machine on sale for $5. Of course I brought it home. The typewriter is a Montgomery Ward Signature 440T, made in Nagoya, Japan in 19681. It appears to be in perfect working order, although it’s extremely dirty inside. My intention is to restore it as best I can, which for the moment I believe means taking it apart and cleaning it, then putting it back together. I’ll put a new ribbon on it, and from there I think it’ll be ready to type. 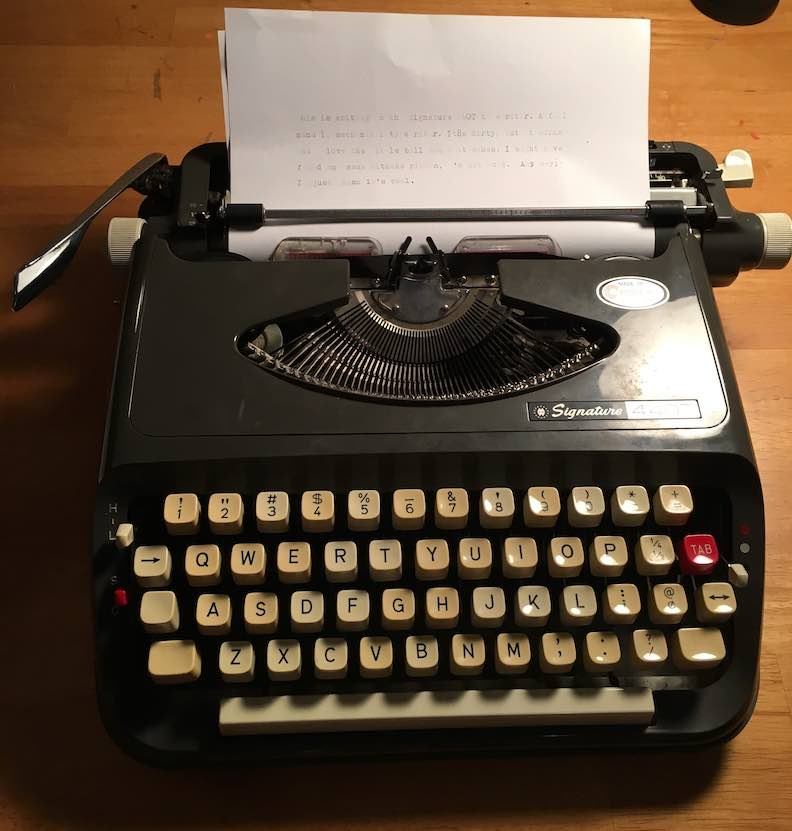 Perhaps I’ll send out a letter or two with it. Maybe address envelops. I don’t know that it’s really got a lot of practical use other than looking cool on my desk, but it’s a project, a hobby, and things done for fun don’t need to be practical.

The machine is entirely mechanical. No electricity, and it’s lasted fifty years so far. I imagine it could last another fifty if I take care of it. I don’t think I can say the same about my iPhone or the iMac I’m writing this on. Eventually the components in both devices will wear out. The battery will fail to take a charge, the screen will start to fade, the drives will start to give errors. Things break over time, and in our disposable culture the answer is to throw it away and buy another one. Meanwhile, the typewriter I bought for five bucks has lasted for fifty years.

It’s a single-purpose machine. Created back before attention was a sparse commodity. Before the Internet, before smartphones, before twitter or facebook. All gears and pulleys, levers and hammers. You have to think hard about what you are writing, and not make any mistakes while typing. If you do you have to pull the entire page out and start over again.

I’ve been thinking about what we’ve lost, and what we’ve gained over the years. It’s true that the Internet enables new business models, my own included, but are we really better off now? I’m not sure we can objectively say that the Internet has made the world a better place. Have smartphones made us happier? Research says we are now more alone and isolated than ever, with increasing rates of depression and negativity. Politically we are at each others throats, failing to see the world as it is and instead seeing it through the lens of partisanship. 24-hour news creates catastrophes where there were none, everything is an emergency.

In the middle of all this, we are struggling to find peace, happiness, acceptance, and love. The Amish reject any technology that they feel would pull them apart instead of bringing them closer together. I think they are on to something there. Of course, I have no intention of converting, but it does leave me wondering “where do we go from here?”

I’ve said for a while that I thought the best technology was nearly invisible, silently enhancing our lives in the background while we go about our day. Unfortunately, today’s technology has been developed to provide what people want, but too often ignores what they need. I wonder if what we need most is a cultural shift to view the negative aspects of technology as being as harmful to us as cigarettes and alcohol. Sure, the smoker loves to smoke, but it’s killing him. Looks like all of us love social media too, but it’s breaking us from the inside. There’s something about the psychology of being online that changes our behavior in ways that are completely aberrant.

The affects of computers and the internet on our society are compounding. My wife is a teacher, and the school started giving the kids computers years ago. Now she’s thinking about going back to books and paper just so she can get the kids to pay attention to the class and not be distracted by what the computer provides. What will happen to these kids in the next ten to fifteen years? Will they be able to concentrate on hard problems at all?

For thousands of years people lived pretty much the same from one generation to the next. Technology has always advanced, but never so fast as it has in the past one-hundred years. So much has changed at such an unprecedented pace. Our psyches and our bodies are not prepared for what the technology has given us.

It’s possible that I’m getting to a certain age where people tend to reminisce about how things were when they were young, but I don’t feel like I’m quite that old yet. It’s just a different world now. Is it the world we want it to be? I wonder. I look at my typewriter project and wonder.